When the very clever and talented 'Ellie Q' of Color My World asked me to be a part of a small group who would create a mini quilt to a theme four times a year I jumped at the chance!   The idea of this challenge group was inspired by the girls of Four in Art Group who make amazing projects!  Challenge 4 Art, as our little group is called, consists of four fab people: Ellie Q/Lisa of Color My World, Claudia of Machen und Tun [who I met at Fat Quarterly Retreat last year where she taught me how to make a zippy pouch], Susannah from fiberchick - and me!!

Our first theme was 'GROWTH' and I thought of all sorts of things that I could make that represented growth but I also wanted to show my 'growth' as a patchworker/quilter. How would I show that?  Through paper piecing of course!


My original plans for my mini quilt definitely 'grew' and evolved as I sewed it.  Originally I wanted to have three rows of three sprouts but I broke away from the group 'rules' of a 24" maximum mini and made a long skinny rectangular mini.  I'm the naughty one in the group!   The dimensions are 34.25" long x 7.75" wide.
[Edit:  the rules were for a maximum perimeter of 100"]


A year ago I had never even heard of paper piecing and my first few attempts at following a paper pieced pattern had me in tears, literally!  Fast forward to me today and I am a paper piecing pattern tester, I am in two Block of the Month programs all to do with paper piecing and I now LOVE making paper pieced things!  I think it is fair to say that I have learned a new skill -- I have grown - and shown GROWTH - as a crafter.


I used several different white on whites to create the background.  I wish I had used white wadding instead of the natural because you can see the natural behind the white.  My scrap bins overfloweth so I used lots of different greens (I would say it is one of my favourite colours) for the sprouts and stems.  A piece of Kaffe Fassett Aboriginal dots was used for the binding.   I am practising my quilting and did some dense organic straight lines (aka wonky straight lines) which is my new favourite quilting design. 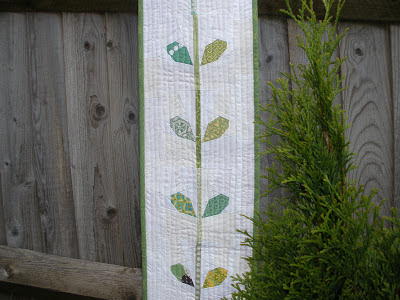 I hope you have enjoyed seeing how I interpreted 'growth'.  I love my new paper pieced skinny-mini!  Be sure to visit the other girls over the next day or so to see what they have created for the same theme!

It's so lovely - well done! The last picture is beautiful.

This is absolutely gorgeous!! :) You did a beautiful job (and I love the choice of backing!)

Fabulous! I love it!

Love it! I'm especially impressed after seeing the measurements--so small! I like your thinking behind it--I was so caught up with the idea of leaves that I didn't even think of something like quilting growth--great idea!

Love all the different greens & neutrals in this Amy. It's great that you are loving PP now. I bet if someone had told you last year that you would be a PP expert you would have though they were mad! Really beautiful work - love the straight line quilting too x

great quilt, Amy! i love it´s longishness and the leafs are adorable!! And the white-white background is certainly something i will steal for a project.. clever plan, wonderfully made!!!!

It's gorgeous, hope you bring it tomorrow :-)

Oh this is beautiful!!! I love everything about it...

Love it! It's so pretty and really is a testament to how far you've come with your paper piecing! You've definitely got the paper piecing but now hey! ;)

I like the way that you have tested your own growth as a quilter to paper piece and quilt this superb mini. You have done a great job. Di x

Do love your quilt but your comment about paper piecing bringing you to tears is what prompted me to write. Been there - but not moved on like you -just quit and vowed never to do again - this was after a group class and then a private class!!! Not sure there is hope for me but I do enjoy other quilting! Look forward to the next three quarters!

Beautiful! I love the look of the delicate sprouts, and the quilting growth symbolism. Lovely.

Ellie tipped me off to the forming of your four/art group patterned after ours, so I'm hopping around to see your first finish.

This is wonderful and represents the theme of growth so well. The different greens really bring movement to the eye, and that is abetted by your lines of quilting.

Congratulations on a first finish!