Orange you glad I took a picture? 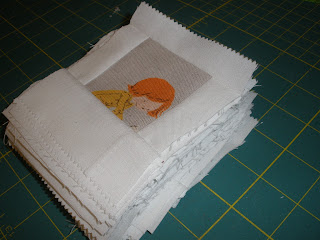 I have joined the *Picture-Perfect* Polaroid Block Swap orgainsed by Debbie from A Quilter's Table.  This is a different kind of swap - no secret partners, no mosaic and no stalking anyone (phew - I was starting to feel funny about all the stalking I was doing, I mean 'research'!!).

For this swap, you say how many you will sew, sew them up and then send them to Debbie who re-packages them and sends you the same number back of blocks made by other people.  Cool eh?

So on Sunday night, after a small nap on the couch  [I needed it - we had an amazing London Modern Quilt Guild meeting at the amazing Charlotte's house and I needed to re-boot my brain], I sewed 30 Polaroid blocks together!  They took no time at all - the longest part was finding the fabrics to fussy cut!  I used a tutorial from capitolaQuilter but we are not trimming them down - that will be up to the receiver which is a great idea as we all tend to do slightly different 1/4" seams!  Here are just a few of the 30 that I made (notice yummy Echino car and Thomas Knauer giraffe?): 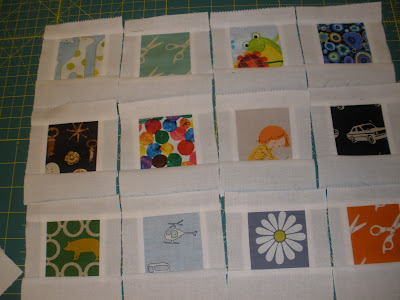 I love the frog on the top row - he's a leftover from the 'A Frayed Frog' shaggy quilt I made in May.  I still love that fabric!!  Here are a few more of the ones I made: 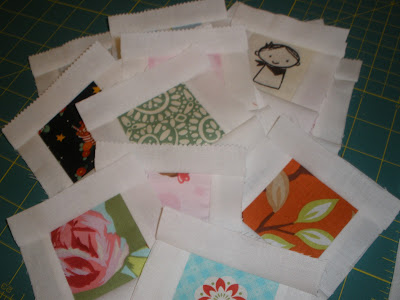 I am looking forward to seeing which polaroids I get in return as there are some really neat ones up on the Flickr page.  All this swapping is making it feel like Christmas!  A HUGE thank you to Sewlandia for sending me the fabric with the soccer kids on it and the Heather Ross fabric of the cowgirl playing with her horse toys!  I've only cut a stip off each so I still have loads to use in another project - phew!
_______________________

And in other 'swap news' - I finally finished my small item for my secret partner in the Modernista Homemade {sewing} swap.  I had some feedback from the group about the colours I initially picked for the 2nd item so I abandoned the blues and went with a variety of orange fabrics.  Some of those fabrics also became Polaroid blocks as you can see above!

I made this cute drawstring bag.  I actually cut into my NEW Kate Spain 'Serenade' fabrics - yum [thanks to A Quilt Story and Southern Fabrics for those], and my Moda Half Moon charm pack!  I used fusible fleece again - I love that stuff because the bag is soft but can still keep its shape which is perfect for this project (and what the pattern called for).  I used orange Aurifil too which complimented the fabrics nicely.  The pattern I used was a free tutorial from A Quilting Life.
﻿ 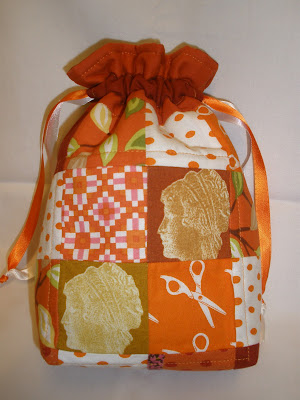 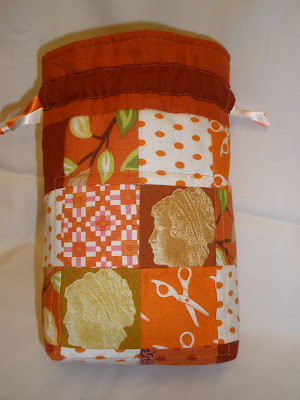 ﻿
I hope my {secret partner} likes it - I agonised over what to make her for several weeks after having to change my plans for item number two when I found out she already had what I was thinking of making her [found that information during an in depth stalking research session]...  So I think she will like this (she better like it - I don't have time to make anything else!!).  Hopefully it isn't too orange!

All I have to do now is let the swap-mama know I am ready to post my items to {secret partner} and then I can concentrate on my Brit Quilt Mini Quilt for Round 3...  No rest for the wicked they say ;) 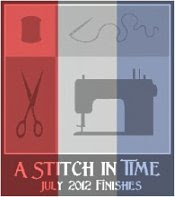 Posted by Amy's Crafty Shenanigans at 01:16

Lovely bag - great choice of fabrics. Your partner should be very happy!

love the bag - the stamps are fab! That polaroid swap is a great idea, too!

Love the bag and your polaroids are fab!

The polaroids are lovely and I do like the bag, especially with the stamp fabric making an appearance. Cool! Di x

Oh I love the polaroid blocks! Any idea what you will do with the ones you receive?

I love both the concept of polaroid blocks and your execution of them. Do you have a final plan for them when they return? Because you know, apparently polaroid blocks are verrrrrrrrry comfortable on top of big hills. Just sayin' is all...

Great blocks, I Spy but not for kids necessarily.

Loving the Polaroid blocks! Wish I had time to get in on that swap =D

your polaroids look great! i love the selection of fabrics you pulled together.

Loving Polaroids atm. I just made a few paper pieced ones but not for this swap, for another one I am in ;0)
xxxx

Love you polaroid blocks and am glad you are enjoying the swap! Nice bags you made too!

I love orange! It is a beautiful color and I love the fabrics you used in that cute little bag. Your swap partner will LOVE it! Great finish and thank you for linking up!

Also, I love your Polaroid blocks! They are darling! And what a fun swap idea.

Your polaroid blocks look fantastic! As does that great bag - love the fabrics!

Those Polaroid blocks are awesome!! Love the little drawstring bag too! :)