8 inches plus a fail or two

I grow some of my own veg in my garden.  This year I planted far too late and used last years soil.  Fail.

However, I did manage an 8 inch green bean - YAY!  I wish I could have entered it into some contest somewhere but hey - time is precious and I am hungry! 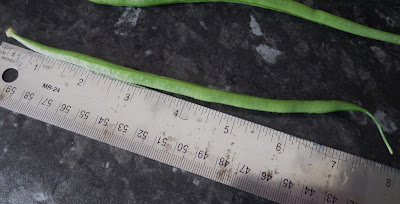 My poor tomatoes did not turn red and have now split so are green-split-blah-ness.  Fail.  The chives are great, the rhubarb actually grew this year and the garlic-chive plants have flourished.  Success!  Today, once the rain stopped and the sun came out, I picked the beans and the peas - yum!  I usually grow three types of beans but this year I only planted dwarf green beans (non-climbers).  My favourite! 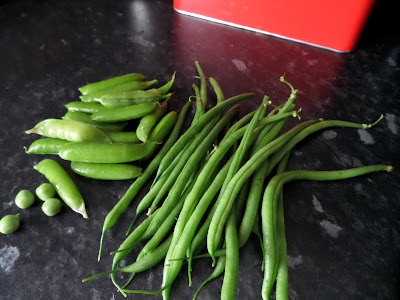 Where there is success there must be some failure too (in my case anyways!).  My biggest failure this summer were my poor poor parsnips.  I've not had any success growing them at this house.  I think I put them out too early, then we had too much cold, too much rain, not enough space, etc etc!  I think they gave up growing and became stunted so just didn't grow any further.  Oh dear.  Here are two I pulled today to see what state they were in: 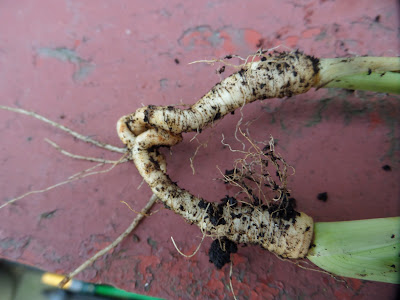 As you can see, the parsnips are tiny, twisted and inedible.  Oh well.  Maybe I can plant some more for a winter harvest?  With fresh and lovely new soil in a bigger space?  Covered with a cloche?  Or maybe just buy them for a quid at the grocery store!!!??

You've done way better than me, those beans are great! I'm still waiting for my tomatoes to ripen and I have some beetroot on the way, but all in all a poor year for us, partly due to my laziness.
We did pick an extraordinary amount of blackberries and apples today, and some elderberries too - thank goodness for the wild stuff! x

I thought your 8 inches was a challenge to Kelly's 11 inches but I see it is about a bean! We find beans & courgettes grow well and that broccoli & cauliflower are almost impossible. I remember growing peas by the dozen as a child but down here they all seem to get infested with pea moth - ugh. Well done on your veggie haul!

oh, Amy, if you have a reasonable number of them, you can still make green tomato chutney, or if you haven't enough, mix the green tomatoes woth apples, and make mixed, green tom and apple chutney. Not such a fail then!

And the season has been awful! My only real successes this year have been damsons, redcurrant and courgette. So, you are not alone!

well I planted mu balcony with veg this year. Peas and beans . FAIL, overwatered and died
tomatoes, cherries OK but bigger varieties got blossom rot, humph
Courgette only male bits and not enough flowers to make my favourite stuffed flower dish.
Carrots looking lovely above ground, who knows what lies beneath.

Congrats on your successes! You can't beat homegrown veg! I don't know anyone whose tomatoes are doing well this year but your parsnips might grow more. I never dig them up before a frost :)

I think you have done really well! My courgette plants are out of control and producing way more than we can eat! Lettuces were good while they lasted and I too have thousands (of yet unsplit) green tomatoes. It's been a funny year :)

I've grown no veg, but do look forward to trying your green tomato chutney......

those parsnips are basically the only kind I like: inedible!