Texting While Sewing was announced by Amy of During Quiet Time a few weeks ago and is a sewing linky/competition for blocks made using text fabrics.  I immediately joined the group and gathered up all my texty prints.  I even bought some new ones too (I couldn't resist as she gave a flat rate shipping code for Sew Me A Song so it would have been rude not to use it, right!?)! 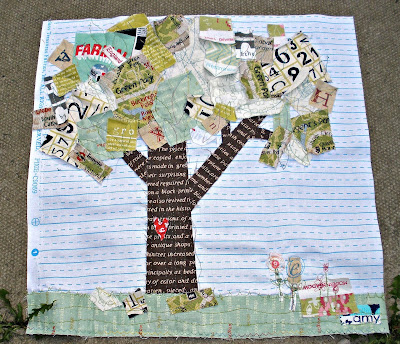 Anyways, I sketched an idea and then went on holiday.  When I came back I had fallen out of love with my sketch so I decided to just get sewing and create as I went along.  I managed to make two blocks and I hardly made a dent in the fabric I have!!

In my first block, I sewed bits and pieces of texty fabrics onto my tree trunk which is fabric with what appears to be an essay all about the history of quilting!!  I even managed to 'sign' my name with a little piece of Amy Butler selvage tucked away in the bottom corner!!

Each leaf and flower, the tree and branches and even the grass have been sewn on using three different coloured Aurifil threads, invisible thread, two different coloured Gutermann threads, some embroidery floss and a variegated thread.  I'm really pleased at how my block turned out.  It was a bit of experimentation and luck but I quite like it because of the shaggy edges to it!  I think it will become a pillow eventually!

Here are a couple detail pictures for you of the tree trunk and the stitched leaves: 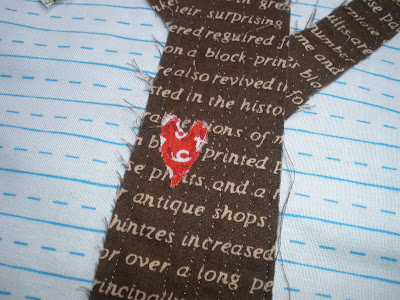 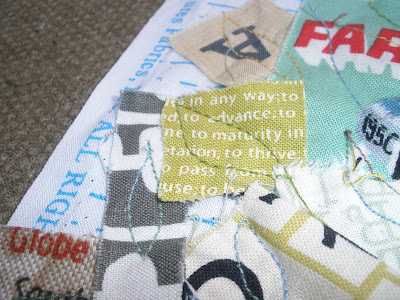 My second block is a Wonky House and Wonky Tree - two of my favourite things to sew.  I've lived in 8 different houses in 11 and a bit years so I am partial to a little house or two!  However, I'm not loving this block because of the background fabric!  There isn't enough contrast between the background fabric and the tree and house, and the fact that it is cream and brown makes it all sort of wishy-washy and dull.  I would have preferred a white background.  Oh well - I'll know for next time to buy MORE fabric so I have a bigger selection to sew from!!! hahaha 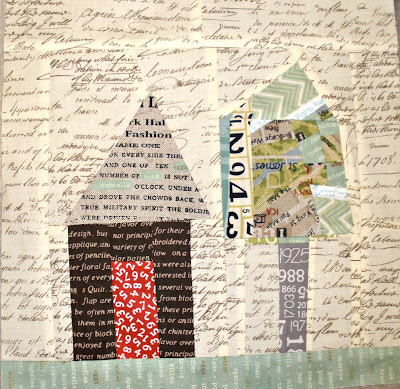 In the roof, there were words like 'die' and 'dead' (a snippet of a news report from a World War I believe) so I cut pieces of the grass fabric and put 'eggs', 'umbrella' and 'book' over the negative words!  At least they look sort of like roof tiles!  And there you have it - two texty blocks... done.

I will be linking these blocks up to the party.  Check it out - there are some fantastic blocks on display!! 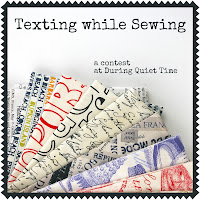 Also linking up to Fabric Tuesday.
Posted by Amy's Crafty Shenanigans at 22:56

Loving the tree block! Such a fun idea with the leaves, cheater using the selvedge name, you can buy some for me too whilst your shopping, fill those extra envelope gaps =P.

Nice blocks really like the tree one. Di x

Thank you for joining! I love the spirit of your blocks! The tree is so alive!

How creative! I love what you did. Very free form!

bloody hell woman - that tree is amazing! Bring it on sunday, pleeeeease!!!

Hi Amy! I love your tree! What a wonderful idea and beautiful result! Thank you for your kind words about my baby quilt1 x Teje