Jax is our little (not so little - he weighs 18kg) dachshund/beagle dog.  Apparently this mix of breads can be called 'Doxle'.  Cool eh?  He is the light of my life! Just look at him - so gorgeous! 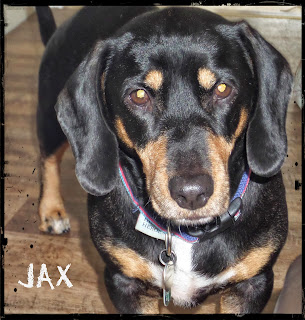 Jax is just over 7 years old and is such a hound!  He follows a trail just like a beagle and rolls in fox do-do to disguise his scent just as dachshunds do.  He can howl like nobody's business and can bark like a yappy dachsie!  When he sleeps he looks so precious and I gaze at him in awe! 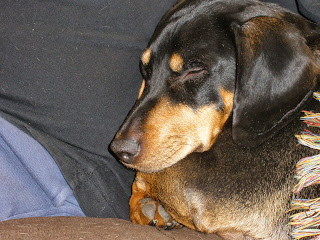 He loves to sit on the couch and surf the 'net'!  Just joking - though I did find him propped up like this one day!  This is not a staged picture - it really is how I found him!  Silly dog! 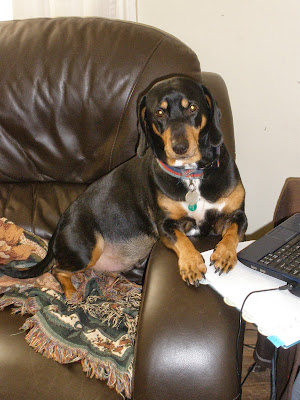 One of his favourite places in the cottage is the edge of the bed so he can look out the window, hoping to catch a glimpse of a fox, the local naughty cat and the men who cut the grass outside the window.  This means I (try to) protect my bedding from his hair and muddy paws with my very robust and utilitarian shaggy edge plaid quilt. 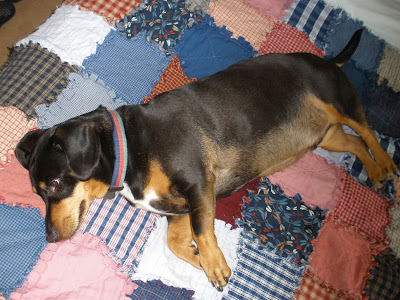 And because he is a dachshund, he definitely likes to be covered up to sleep.  Here he is emerging from another of the plaid quilts! 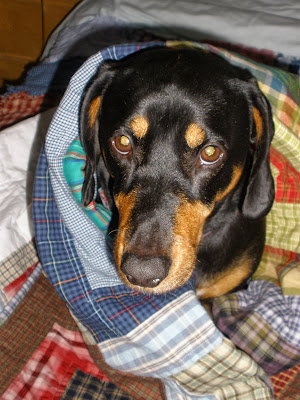 We were lucky to get Jax when he was 15 weeks old.  We are his third set of owners.  He has lived in four different houses since becoming our little 4-legged friend.  He is an outstanding runner and can run like the dickens!!  Rain doesn't bother him (nor does snow!) and his internal food-clock makes him wake me up on a Saturday morning at 6:30am for his breakfast! 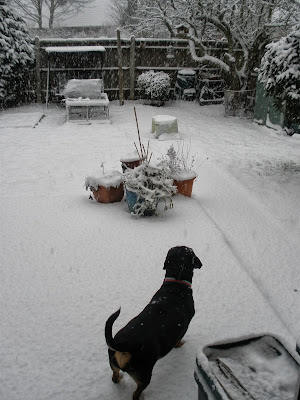 He buries bones in my vegetable patch in our garden and eats the carrots and peas I grow!  Jax is crazy - happy - funny - gorgeous. 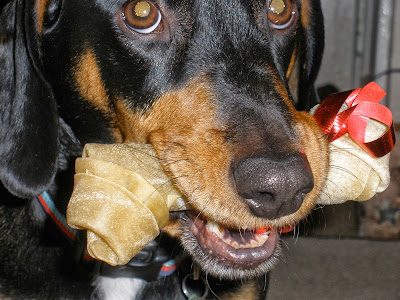 “This post is an entry into the Tots100/Swell UK  competition.”

Posted by Amy's Crafty Shenanigans at 23:08

I love Jax! What a great mix of breeds. I used to have a Beagle mix - he liked to be under the covers too.

Me too! I've always had weenie dogs and loved them dearly. They can be quite a handful.....Hugs to Jax!

Aw, he's just adorable - I really just want to cuddle him!
Have a lovely weekend,
Xx

gorgeous doggy! Katie would love to meet him one day :-D

My Ben is a Yorkie Spaniel cross, I call him a Sparkie as he is a live wire. I love him to bits and go through all types of weather to walk him. He has his own quilts, all my trials and experiments get sewn into Ben sized quilts and he just loves to burrow into a pile of them.

My dog is my best friend too! He is a lab/border collie mix. He lays at my feet when I am sewing and herds my grandchildren!
I enjoyed your photos today!

My childhood dog was a great mix too - Beagle & German Shepherd. med size and med fur with beagle coloring and ears, and she could sure howl with the best of em! Jax is adorable, and happens to be the name of one of my fave restaurants:-)